I waited for two years to write this book. The idea came to me when I was in the midst of writing HIDDEN. And then I started Copper Falls. And then Hidden: Soulhunter. And I promised myself that once I got through the writing of the second Copper Falls book, I’d finally sit down and write this fun little series.

As I mentioned over the weekend, the path to this book wasn’t nearly as simple as I thought it would be. I lamented on Facebook that I had to scrap the first draft. And, silently (and maybe cursing more than a little) I scrapped most of the second draft, too.

Three rewrites. That’s what it took to get to this point, and I am SO HAPPY that I didn’t just try to trick myself into thinking that the first version was okay. Because, guys… I love this book. I wrote this purely for myself, and I’m happy. Luckily, I’ve learned over the last couple of years that when I love something, chances are good that at least a few of you will love it, too, because you get me. 🙂

How about a synopsis first?

Superheroes exist. Driven, honest, courageous…  true heroes. They live among us, and all over the world, they save lives. Their stories are told in hushed tones to rapt audiences, over and over again, myths of epic proportions.

This is not that kind of story.

Jolene Faraday is the girl next door, the sweet woman who’ll help you unload your groceries, lend you twenty bucks when you get into a bind. She’s the girl who takes care of her mother, pays her way through college, and even escorts her elderly friends to church.

She’s also the Detroit area’s most infamous burglar, robbing the rich in the wealthy suburbs, getting around their security as if it barely exists, making a mockery of the law enforcement agents who are determined to bring her down.

Life is just one long con game, and she’s the best there is at what she does.

And one day, it happens.

Across the globe, a new wave of ordinary people find themselves with super powers. Some hide, afraid of what they’ve become. Some become heroes; others, villains.

And suddenly, it’s not just police officers after her. She’s officially under the jurisdiction of StrikeForce, Detroit’s supernatural law enforcement force, an agency shrouded in mystery. As she and her new partner become more audacious, she finds herself on StirkeForce’s most wanted list.

My husband, as always, was my cover designer on this one, and I am so absolutely in love with this cover. It’s so Jolene. Take a look! 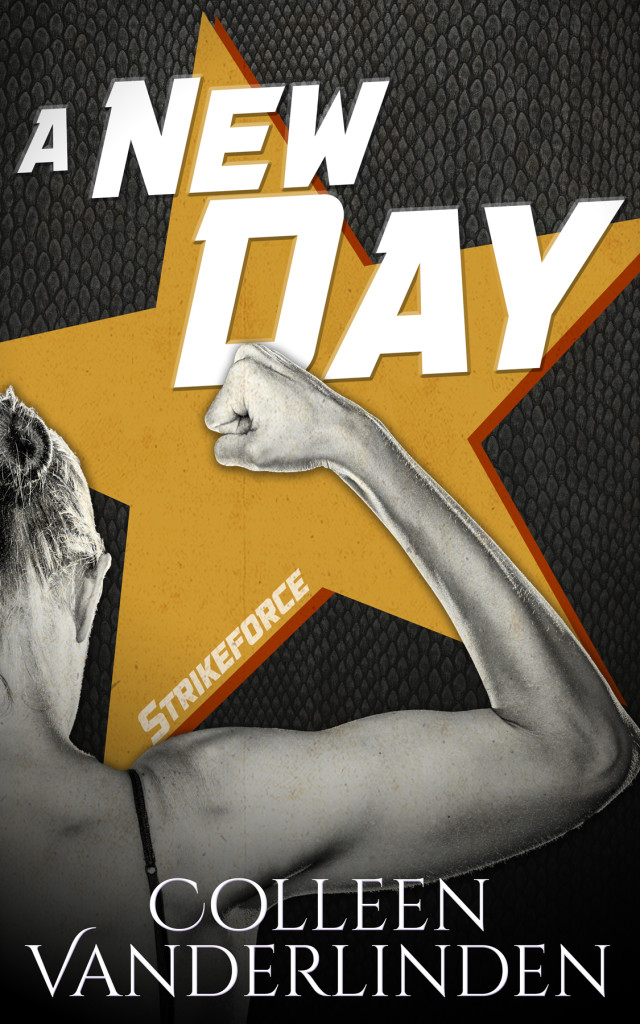 So, when can you read it? A New Day will be out on Tuesday, November 17th. I will be doing a pre-order, and I should have links available for you later this week. In the meantime, if you’re on GoodReads, please add it to your TBR over there. I am so excited about this series, guys! I’ll have more for you in the coming days, including a peek at chapter one, playlists, and that preorder link. Sharing on Twitter and Facebook to help spread the word is also always very much appreciated!

Thank you! You guys make it so I can write the kind of stories I love, and there are no words for how much I adore you.