It’s almost here! The fourth StrikeForce book, which concludes the “Killjoy” story arc, will be out on May 9th, 2016!

This book, guys. This book drove me nuts, but in all the best ways. I feel like I stretched myself a bit as a writer. I tackled some things that I wasn’t sure I could manage. It’ll be up to you, of course, to decide how well you think I managed it, but at this point, I’m glad I tried some things I wasn’t sure I’d be able to do. If you’d like, you can add the book to your GoodReads shelf here.

Okay. How about a synopsis?

Alternately hated, loved, trusted, and feared by the city she’s sworn to protect (sometimes all on the same day), Jolene Faraday, A.K.A. Daystar, has finally crossed the line.

In a fit of rage, her actions led to the death of the supervillain known as Render. That line, that paper-thin line between punishing and killing, is the one thing that allows ordinary humans to live in a world with super powered beings without being in a constant state of panic. And when one of their “heroes” loses control and crosses it, fear of supers reaches an all-time high.

And it’s not just the citizens of her city who are afraid. The Tribunal is calling for Jolene’s arrest, which Portia, leader of StrikeForce, refuses to comply with. StrikeForce’s insistence on protecting Jolene only adds fuel to the fire.

An Enemy Lurks in the Shadows

The world sits on the verge of chaos as Killjoy initiates the next phase of his plan, and StrikeForce continues to be one step behind the enemy.

But Killjoy’s next move, the move that has the power to destroy everything Jolene and StrikeForce have tried to build, will change the team, the city, and Jolene, forever.

And…. the cover! I ADORE this cover. Throughout this series, my designer (also my husband — it’s very convenient!)  has done an amazing job of accomplishing the comic book/superhero movie feel I was going for. 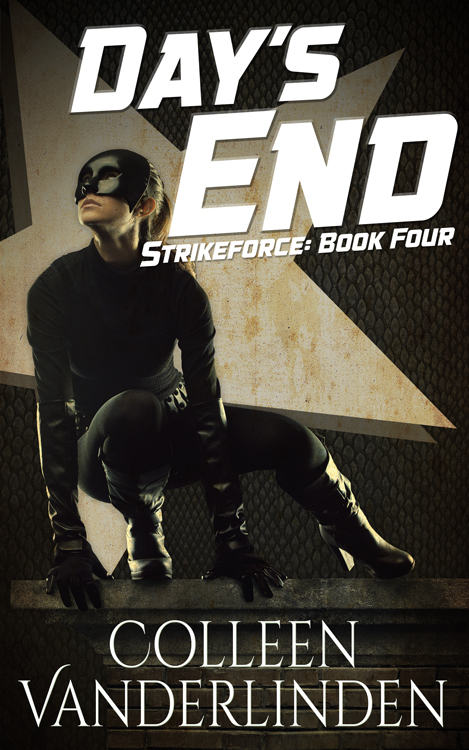 So… May 9th! I can’t wait to hear what you guys think. I’ll have an excerpt up on the blog here in the next week or so, and some updated news about EXILE — I know many of you have been waiting for the next installment, but I needed a break and since we had come to the conclusion of act one, it seemed like a good place to stop… for now. 😉