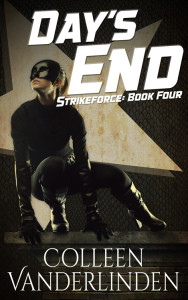 It’s here! The next part of Jolene’s story, and the final part of the Killjoy story arc is available now, and I cannot wait to hear what you think of it.

Day’s End picks up several weeks after the events of Darkest Day. The Tribunal wants StrikeForce to turn Jolene over to be tried and punished for Render’s death. Suspecting that Eve is just a little too cozy with Jolene’s enemy and former love interest, Killjoy, the team refuses to turn her over, which results in the public hating and distrusting the team even more. Eve has squads of Tribunal soldiers in Detroit, ready to grab Jolene if they get a chance, so she’s essentially on house arrest, stuck in StrikeForce Command until the insanity dies down.

But while Jolene has been mostly down and out, her enemies, Killjoy and the mysterious woman in blue (who has been kidnapping super powered kids), seem to have upped their games. It isn’t long before Jolene refuses to sit back any longer, and when she and Killjoy clash, it changes both Jolene and StrikeForce forever.

I loved writing tis book! I hope you enjoy it. You can grab Day’s End now, over on Amazon.