Ah, 2014. What a year. Not only was it an exciting year for me professionally, but I was able to read SO MANY books and comics this year that I absolutely loved. I thought I’d share some of those here. 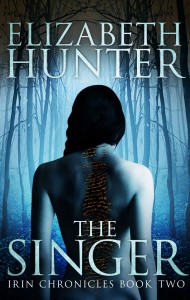 1. Elizabeth Hunter’s The Singer. Just….gah! I loved The Scribe. I’ve been honored to have beta read both books in Hunter’s Irin Chronicles, and damn did my girl out-do herself with The Singer. Hunter’s writing has this kind of haunting, rich quality to it that sticks with you. Her ability to describe a place to the point where you swear you can even smell the scents permeating the air… it’s just amazing. I loved the first book in the series, but The Singer is in many ways an unforgettable book.

2. Grace Draven’s Master of Crows. I was introduced to Draven by Elizabeth Hunter, and I’m so glad for it. Master of Crows is fantasy romance at its best. There’s a darkness there, a sensuality, and characters that stay with you long after you’ve turned the final page. Draven’s writing is best described as lush. Sensual. I swear the woman could describe beige walls in a way that would make them sound sexy. This is a must-read.

3. Meljean Brook’s Frozen. A unique take on Beauty and the Beast (one of my favorite stories, ever) but with… frost giants. Oh, yeah. This book had me on the edge of my seat the entire time — full of tension and sensuality.

4. Eve Langlais’ Welcome to Hell series. I read this entire series over the course of a couple of days and honestly laughed out loud several times. Langlais has a wicked, sometimes twisted sense of humor, and this series was both hilarious and sexy as hell. (Ha. Hell. Get it?)

5. Nora Roberts’ Cousin’s O’Dwyer trilogy. Witches, Ireland, horses, gruff sexy Irishmen… what’s not to love? I’ve alway loved Roberts’ writing, and the way she describes the setting in this series makes it feel like one of the characters; it’s that integral to the story. Loved this series. 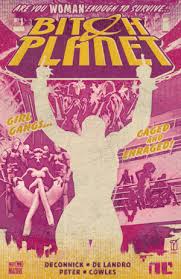 1. Bitch Planet by Kelly Sue DeConnick and Val De Landro. Yes. I know we’ve only had one issue of it so far, but it belongs on this list because reading it was like being punched in the gut. I had a very visceral reaction to it, and I don’t react that way very often to comic books. Aside from the story and art itself, both of which are amazing, has been the reaction to the series. It has been kind of amazing to see women embracing the “Non-Compliant” label that has been the series’ handle since shortly after Kelly Sue started talking about it. And the essay by Danielle Henderson at the end of the first issue beautifully explains why, I think, I and so many others had such a strong emotional response to it. From the essay:

“The striking thing about Bitch Planet is that we’re already on it. We don’t have to get thrown on a shuttle to be judged non-compliant – be a little overweight, talk too loud, have an opinion on the Internet – or be a woman of color…”

In a year in which we’ve seen female game developers and journalists threatened in sickening ways for daring to exist and have opinions, in a year when we’ve seen, once again WAY too many stories about women being harassed, harmed, and belittled… I think this was a year in which something like Bitch Planet was exactly what some of us needed. It’s hard to explain. And I also have to confess that I just wasn’t sure how into this I’d be. I love Kelly Sue, but this didn’t really seem like my “thing.” Very glad to say I was wrong.

2. Thor: God of Thunder by Jason Aaron. When Aaron tells a story, the man goes BIG. This series, from beginning to end, was an amazing ride, and I was sorry to see it end. But, not really, because it led to…

3. Thor by Jason Aaron. The new Thor, who also happens to be a lady (yes!) was one of my favorite comics moments of 2014. I wrote about it here, and I’ll admit that re-reading that issue still gives me chills.

4. Captain Marvel by Kelly Sue DeConnick. This is another series I’ve loved from the beginning, but this year saw Carol Danvers going into space and being an absolute badass punching spaceships and beating up on aliens. What’s not to love?

5. Rat Queens by Kurt Busiek. Foul-mouthed, tough, hilarious characters make this one of my favorite comics EVER. Add to it the fact that anyone who’s played D&D, Warcraft, or any other RP games feels very much at home in the world Busiek has created, and I’m pretty much in comics heaven. I love the Rat Queens, I love the secondary cast of characters, and I love that there are no delicate little flowers here. It is perfection, and I have yet to read an issue that doesn’t have me dying of laughter at least once.

So, there we go. There’s my year in reading. I didn’t realize until just now how much girl-power my favorites had in common, but I guess it makes sense. I can’t wait to see what next year’s reading brings me!