We are about a week and a half from the release day for Shadow Witch Rising, so I think it’s time for another teaser! This little peek gives you a bit of insight into Sophie’s powers, as well as introduces you to two of her oldest friends. I hope you enjoy it! 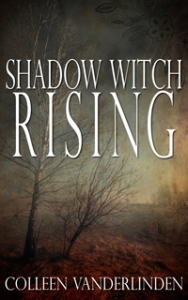 Sophie drove home from work, singing along to Taylor Swift and, as always, enjoying the scenery on the meandering two-lane highway. Forest on both sides, and the leaves were starting to turn, shades of red and orange adding to the lush beauty. The sumac at the base of the trees along the roadside were already crimson, like rubies dangling from arching branches.

The sun was just starting to set, washing the landscape in deep orange. She drove with the window down, and let the cool breeze reinvigorate her after eight hours of cleaning up other people’s messes. Not that she wasn’t grateful for it. She was happy to be back in the place she’d grown up, and happy she could support herself. Not only had it been the place she’d spent the happiest times of her childhood, not only was it the only place she’d ever lived where there was actually a community of “others,” including witches and shifters, but it was more friendly and welcoming than anyplace she could imagine. The year-round residents all knew one another. Her first winter, no less than six people she knew from town had driven out to check on her, knowing she was a city girl and, most likely, needed help. She hadn’t, but she’d been touched by the gesture, especially after spending most of her teens and twenties utterly alone.

She rounded a curve in the road, and noticed a large form lying at the side of the road. As she got closer, she recognized it as a deer. Its legs were moving, but it seemed to be struggling.

Sophie pulled over onto the shoulder and got out of her car, leaving the car running and the headlights on so she could see clearly in the darkening evening. She reached the deer and crouched down near its head. It was a doe, she realized. She caught movement in the brush at the side of the road. When she looked, there were at least two fawns there.

Looking back down at the doe, she noticed that its left shoulder was bloodied. She touched it gingerly, felt bone shift beneath her fingers, and the doe let out a pained call.

“All right now,” Sophie murmured, keeping her tone low and soft. She rested both hands over the wound, focused. The doe calmed, stopped flailing, stopped its mournful calling. Sophie closed her eyes, focused what little Light magic she had. From what she’d read, she was basically doing everything wrong. It seemed that many Lightwitches felt and went by instinct more than anything else. Maybe it was because Sophie’s power was so meager in the first place, but she didn’t rely on feeling and intentions. When she closed her eyes, after a while, she could see, in detail, the way the deer was injured, worked her magic in and around it as if binding the broken bones. Her magic wasn’t a sensation or a spirit or whatever her fellow Lightwitches called it. Maybe that was the way it was supposed to be. That was entirely possible. But to Sophie, her magic was and always had been more like a tool, something she could focus and use to her own will. There was really nothing ethereal about it, not the way she used it. Maybe if she’d been trained by another witch instead of learning on her own, it would have been different.

It worked, and that was all that mattered to her. Even with the meager amount of Light magic she possessed, Sophie soon felt the doe’s shoulder healing, bones knitting back together. Had the break been more substantial, she knew she wouldn’t have been able to fix it. Minor wounds, she could heal. Anything beyond that was impossible for her. Her real power seemed to be in protective wards. This was just a side thing she’d figured out as a teenager.

Pulling her hands back, she opened her eyes and looked down at the doe. She was no longer bleeding, and was already trying to stand. Once on her feet, she gave Sophie one final glance, then bounded toward the woods where her fawns were waiting.

Sophie smiled and stood up. The after-effects of using her magic left her warm and peaceful. And, just as the few times she’d managed to heal before, she felt a little more powerful, almost as if Light itself was rewarding her for doing something good with her power. She actually knew it to be true. Her magic had been almost non-existent, just the barest threads of power. Each time she’d done something worthwhile with her magic, she’d felt herself grow a little stronger. Not by leaps, but by bits. Enough to make a difference and enable her to ward herself from danger and use her magic for good things.

Sophie got back into her car, took a couple of wipes from the canister she kept in her back seat, and cleaned the drying blood from her fingers. It was dark now, and the woods looked less friendly. Time to get home.

She put the car into drive and maneuvered onto the empty highway. When she pulled into her driveway, she shook her head. The twins’ familiar convertible sat in her driveway already, the sisters sitting on her porch waiting.

She got out of her car and slammed the door.

“Nice to see you, too, dear,” Sophie said. “What are you guys doing here?”

“Were you saving wildlife again?” Cara asked with a wry smile.

“Come on. Go wash the deer stink off you… although, maybe not. That might actually work for you,” Layla said, and Cara laughed.

“What in the hell are you even talking about?” Sophie asked, unlocking her front door. The twins followed her in.

“We’re going to Jack’s. And you’re coming with us,” Layla said.

Cara let out an exaggerated yawn.

“Babe, you’re gorgeous, sweet, and you have the kind of boobs I can only get from a really expensive push-up bra. We need to find you someone to get friendly with.”

“I do not need to get ‘friendly’ with anyone.”

“Girl, if that stick gets any further up your butt, I’m gonna start calling you Popsicle,” Layla said, and Cara snorted. “You need to let loose a little and get your mind off of all of this crap for a while. Now, let’s go.”

Sophie rolled her eyes. “What are the chances you’re just going to get up and go without me?”

“Right around zero, Popsicle,” Cara said, and Layla erupted into a fit of giggles.

“Ugh,” Sophie said, though even she had to laugh at the ridiculous nickname. “Fine. Let me go take care of the animals. Are we in a hurry?”

“Not really. We don’t work tomorrow. You?”

“Good. Go do your thing. We’ll be here, rummaging through your cupboards.”

Sophie grabbed the bucket off of the back steps, shaking her head to herself. They did this every once in a while, got it into their heads that she needed to be more social, that she was sinking into melancholy. And, usually, as with now, they were right. She always felt better after a night out with them, so she didn’t put up much of a fight anymore. And they were stubborn as anything. Crazy wolves.

She milked the goats, secured them and the chickens for the night, then carried the milk bucket back inside, put it in the refrigerator.

“Take your time,” Layla said, flipping through a magazine from the coffee table.

Sophie headed into her bedroom, grabbed a gray tweed skirt, a form-fitting black sweater she liked, and her pair of knee-high black boots. She showered (pulling her hair up and stuffing it into a shower cap, because it would take forever to dry and even the twins wouldn’t be okay with waiting long enough for her to mess with her crazy mop of hair). Makeup, clothes, arranging a few of her curls that kept trying to twist funny, and she left the room.

“You are so gonna get laid,” Layla said, and Cara whistled.

“I am not going to get laid,” Sophie said. “I’m going out to have fun and relax and stop thinking about the jerk across the road for a while.”

Shadow Witch Rising is available for pre-order now on Amazon, and will be out on February 23rd!