I can’t believe it’s November already! Halloween has come and gone, and all that’s left is pumpkin carcasses and my children jumping around the house like small junkies strung out on Starbursts and M&Ms. 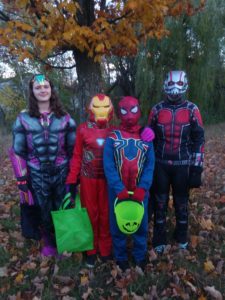 I feel like I’ve turned a corner. Those of you who have been with me from the beginning of my publishing adventure know that  I usually publish 6 to 8 books per year. This year, we’ve only seen two releases, but the good news is that the last two months of the year will have not one, not two, but FOUR new releases from yours truly!

So what’s on tap? Three of the books are a new project I’m working on, which I’ll talk about in a minute. The fourth is book 2 of the Moira Chase series, Two of Swords, which will be out in early December!

So this new series. It’s a little different for me, but I can tell you that it’s helped me get my writing chops back, so I love it. I described it to my beta team for the project as “Supernatural meets paranormal romance.” The books are short, novella-length adventures, each focused on one couple, with a paranormal mystery that needs to be solved and plenty of sexytimes as the hero and heroine work together to figure it out. It has been a BLAST working on and it was just what I needed.

If you’ve read much of my stuff, you know that usually, there’s some big, earth-shattering stake involved. Hidden, Copper Falls, Exile, even StrikeForce, to some extent, have heroines with the world on their shoulders. At this point in time, with our reality in this country… the way it is (let’s just go with that before I start ranting).. I just can’t find any joy in writing death and anguish. I can’t. Moira was a good move toward a more light-hearted series, and I’ve loved writing her too, but I know that when I want to escape, I want to read something fun and sexy and unapologetic in the fact that it’s pure entertainment. So that’s what this upcoming series is all about!

With all of that in mind, here are my goals for November:

I feel like I’ve been numb for the last year or so, and I’m at a place where I’m starting to get back together again. It feels good to be moving forward, and I’m grateful for all of you who are with me along the way. <3