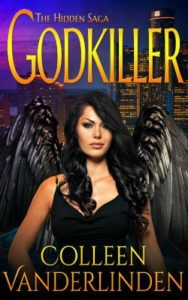 Godkiller, the first book in the next story arc of the Hidden saga, is out TOMORROW! (eep!) This has been a weird year for me, publishing-wise. I’ve released lots of books this year, but only one as Colleen Vanderlinden (Light’s Shadow.) The rest were all released under my Ella Linden pen name.
I enjoy writing contemporary romance, and I can definitely see myself doing more of it as time goes on. I’m also planning to write more fantasy romance (and we’ll talk about that in a minute!) as well as finishing up this arc of the Hidden series over the next few months.
It was fun writing Godkiller, but I’ll also admit that I have no idea how writers who are 20-odd books into a series manage it. So much happened in the previous 11 books of the Hidden series and I’m grateful that one of my beta readers, Haleigh, has an eagle-eye for continuity issues. This is such a sprawling world with such a large cast, and it keeps growing with each book.
Maybe that’s why I have such a high death count? I’m trying to keep it all manageable.
The truth is, every death in my books is necessary for plot, or they wouldn’t be there. I have a humorous little competition with a fellow author about who will rack up the highest death count. To be honest: my money’s on Amy.

Next, while I’ve been editing Godkiller and plotting the next Godkiller Saga book, I’m FINALLY writing a fantasy romance I’ve been planning for a couple of years now, called Faithless. When I was asking my beta reading team if they’d be up for reading it, this was how I described it:

“Fantasy romance. Rogue/smartass heroine. Virgin hero. Forbidden love. Angst and slow burn and hotness and fighting. Are you in?”

They were pretty excited about it, and I hope you’ll be, too. I’ll have a lot more about the book in the next few weeks.
I can’t wait for you guys to read Godkiller, and I hope you love it as much as I do. I went through some personal stuff during the revision phase of the book, and there are things that ended up in the final draft that were part of the process of going through that. One of the things I love about writing is that it allows me to process my own thoughts and feelings in a way that I might not be able to otherwise.
But, that’s a discussion for another day, probably. 🙂 Right now, I’m just excited about Godkiller!

Are you excited to be visiting the Hidden world again? Which character(s) are you most looking forward to reading again?

4 thoughts on “On Writing Godkiller (And what’s up next!)”