I am so excited to finally share this book with you guys! One More Day, the second book in my StirkeForce superhero series is finished! It will be with my beta readers today, and then go through copyedits, and then you’ll have it. When? One More Day will be available on Wednesday, January 20th!

So, what’s the story here?

It isn’t everyday that you find yourself responsible for overthrowing the leadership of a superhero team. Unfortunately for Jolene Faraday, AKA Daystar, she doesn’t have much time to bask in the glow of her victory over Alpha and his cronies at StrikeForce. Though StrikeForce is working to regain its reputation and be taken seriously, the villains they need to handle are out there right now, and StrikeForce is nowhere near ready to deal with them.

Dr. Death, responsible for the deaths of nearly three dozen people when one of his experiments went awry in downtown Detroit, is still on the loose, and it’s only a matter of time before he comes up with another maniacal plan. Super powered people are going missing all over the world, and then there’s that whole “now what do we do with Alpha?” issue.

Aside from that, Jolene is still adjusting to the injuries she sustained the last time she faced off against Death and his crew, as well as dealing with the weight of keeping her past life and her superhero life separate. She can’t seem to find enough time for her irritating sort-of superhero boyfriend, and her friends don’t entirely trust her. Probably with good reason.

All of that means nothing when Jolene is faced with betrayal, heartbreak, and questions of loyalty. In the end she’ll have to decide whether to keep to the superhero route, or risk becoming the very thing StirkeForce always feared she would be. 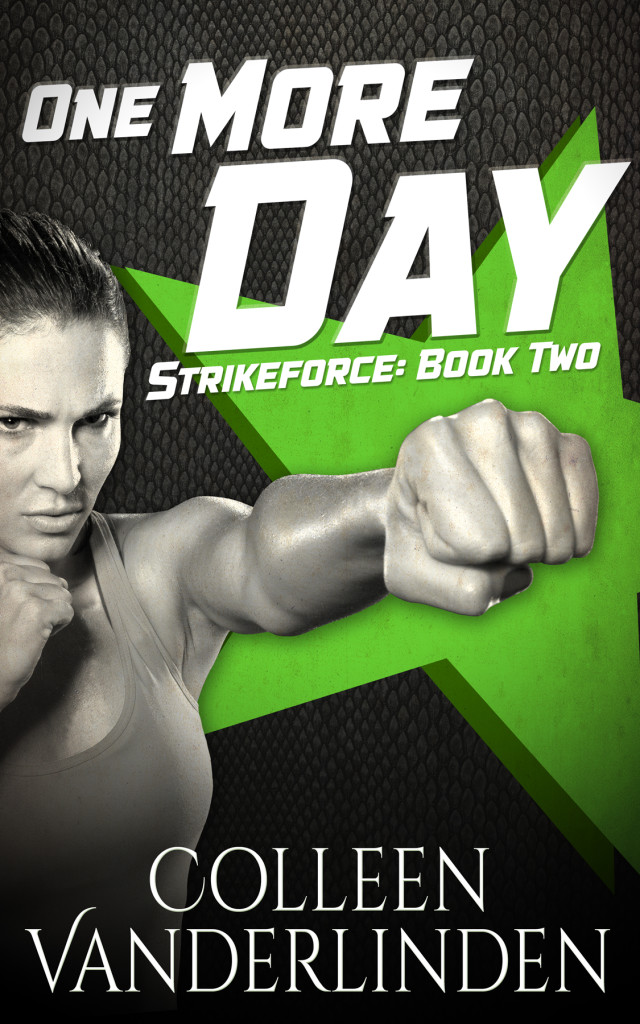 Gah!! I give a little happy dance every time I see that. I can’t wait for you guys to read this one! I’ll have another teaser post soon, as well as my playlist for the book. Here’s that excerpt I promised you. Enjoy!

“On your right,” Caine’s voice said over the comm in my ear. “He’s about to let loose again.”

“Copy.” I swerved, turning back to the right and finally catching sight of the most recent powered dumbass Caine and I had been chasing. This one had been popping up all over the region the past two weeks, damaging buildings and injuring people, and then boasting about it on social media. If I had to guess, I’d say he was in his early twenties, probably. Tall and skinny, jock looking type. He could fly, and he was able to breathe fire.

He called himself, predictably enough, “The Dragon.”

Caine and I had spent most of a day trying to chase him down the last time he’d shown up in Detroit, with the rest of the team backing us up. He shouldn’t have been as difficult to catch as he was, except that in addition to the flying and fire, he had the ability to camouflage himself. If you were anywhere where there were buildings or trees or anything like that for him to blend into, you were screwed.

Over the past hour or so, we’d managed to draw him out near the river and toward Belle Isle. It was more open there, and there were no skyscrapers for him to blend into.

I got ready to move, and the phone in my belt rang. Again. I rolled my eyes. This was the fifth time in maybe ten minutes.

“Shouldn’t you answer that?” Caine asked as I hoisted him up and started flying toward the island.

“What if it’s your mom or something?”

Killjoy. Who I hadn’t heard a peep from in over a month, since the day he’d come to visit me in the hospital wing after my fight with Maddoc. I’d told him to stay away from Command, because I didn’t trust Alpha not to try to take him in. But that wasn’t an issue anymore and if he’d bothered calling or messaging or something even once in all that time, he would have known that.

I dropped Caine on the beach at Belle Isle, where he could get a good shot off if I wasn’t able to take the guy down. He wasn’t getting away from us again.

“Go get him,” he answered, pulling the stun rifle off his shoulder and aiming it. “If he starts taking off again, he won’t get far.”

I nodded, then rose into the air again. I knew by now, about a month after Portia had assigned Caine as my partner out in the field, that when he took a shot, he didn’t miss. The problem was that we didn’t get as many shots as we’d like, and superpowers, unfortunately, sometimes reacted strangely with the stun gun, so we had to make sure that we were somewhere where the chance of civilians getting hurt was low.

I raced toward Dragon, who hadn’t spotted us yet and seemed to be surveying the area below. Either looking for us or deciding which random structure to set fire to next. Either way, he wouldn’t get the chance to do any of it. Everything was a blur as I pushed myself toward him. His back was to me, and I had the perfect chance to get the jump on him, take him down before he even saw me coming.

And, at that moment, my phone rang again. Killjoy’s ring.

Dragon spun and kind of did this funny mid-air version of tripping in surprise. I was already going at him full speed, so I just kept going, and I was lucky that he wasn’t exactly a quick thinker. I bowled into him, got an arm around his neck, and flew with him back down to the ground. Even if he managed to take in enough air to blow fire, there was nothing on the beach at Belle Isle to set fire to. I landed, and he struggled and fought against me. I could see Caine further down the beach, running toward us. Dragon kept struggling and trying to get out of my grasp, and I tightened my hold around his neck, his head under my arm.

And my phone rang again.

“Oh, for fuck’s sake,” I muttered. I used my free hand to dig my phone out of my belt pocket and answered.

“Hello?” I asked, well aware that I sounded like a bitch.

“Well hello to you too. I was wondering if you were ever going to bother answering,” Connor’s voice said over the line. The Dragon started struggling again, and I yanked him back toward me.

“You two are alway together. I see it on the news.”

I was seriously tempted to throw my phone into the river. “I’m working. I literally have an asshole in custody right now and he’s trying to get out of my grip and you’re giving me bullshit about my patrol partner? Are you kidding me with this right now?”

“And what business do  you have saying anything about anything? I haven’t heard from you in over a month and I would have been sure you were dead except that I keep seeing you on the news.”

“You told me to stay away.”

“Oh kiss my ass,” I gave Dragon a hard yank when he tried to get free again. “That has nothing to do with dialing the damn phone once in a while.”

Caine met up with me and started putting the dampener over Dragon’s neck while I held him still.

“So you’re not going to say anything about Caine then?” he asked, and I held my phone away from my head and glared at it. Caine raised his eyebrows at me, oblivious to what was going on, and I shook my head.

“You can call back when you decide to stop being an asshole. I have things to do.” I hung up and shoved the phone back in my pocket just as Caine activated the dampener.

“Don’t know who that was, but seems like pissing off the chick who breaks buildings for fun isn’t the brightest idea.”

I shook my head. “Two buildings, man. Two. You act like I do that shit all the time.”

We started walking up the beach, and I was more than happy to let Caine take over keeping a hold on Dragon. He smelled like burnt eggs and I had to try not breathing through my nose or I’d end up losing my morning coffee in my mask.

“You forgot about that house in Brightmoor,” he said.

“That didn’t count. It was going to come down any day anyway.”

“Uh huh. The Historical Museum?” he asked, glancing over at me.

“I didn’t break the building. Just some of the stuff inside,” I said with a grimace.

“Have they lifted the ban on you yet?”

I glared at him then, and he laughed and hauled Dragon into the mini jet we’d taken out for patrolling.

“You owe me lunch, by the way. I bagged this one,” I told Caine as I buckled into the seat behind the pilot’s seat.

“It’s kind of unfair working with you. You end up bagging all of them.”

“Yeah. All three of the ones we’ve managed to take down,” I said, rolling my eyes.

Caine strapped Dragon into the seat beside mine, securing his hands and ankles and double-checking the dampener before sliding into the pilot’s seat. Then he turned and looked back at me. “Hey. Better than leaving those three out on the street. We’ll take a win where we can get it, and eventually, we’ll start getting more of them. Right?”

“Who would have guessed you’d be the perky positive one of the two of us?” I asked him.

“Perky. Damn. You didn’t have to get mean about it,” he muttered, but I could tell from his tone that he was smiling. We took off, and I watched the city pass beneath us. I would have rather been flying outside of the mini jet than inside it, any day.