I’m hard at work on Copper Falls #1 — I should actually have a title for it soon so I can stop calling it that. Titles are hard.

I’m still grinning over the response Nether has received. I seriously have the best readers in the world, and Nether has stayed right around or higher than #1,000 overall on Amazon since its release. So thank you!!

I was talking to my husband last night about writing stuff, and we got into a discussion about the fact that, at our core, writers are entertainers. We may not see ourselves as having anything in common with a comedian standing on a stage or an actor shooting a scene in front of a camera, but we are entertainers just as much as they are. We talked about how, when I let myself get too bogged down in worrying about responses to things or “being taken seriously” the writing suffers. I get timid, and I start dreading the page.

But when I remember that writing, at its core, should be nothing more and nothing less than playing with words, with entertaining myself first, the writing flows. And it’s fun. Still hard a lot of the time, still something I struggle with, but I enjoy the struggle.

That makes no sense. But it’s true.

I started writing Hidden because I couldn’t not write it. Because I had these characters in my head and they were interesting and I wanted to see what they would do. The entire Hidden series was written in that spirit. I never expected anyone to read it, so when I did crazy shit like kill off a major character or add a crazy twist to Molly’s heritage, I didn’t do it wondering if I’d be taken seriously. I did it because I wanted to see what would happen next.

It’s easy, when you make your bread and butter from selling books, to obsess over rank and awards and the number of Twitter followers you have who actually give a damn about your books. But when that happens too much, we lose sight of what we’re really supposed to be doing: playing with words.

My Writing Warm Up

I don’t know how common this is, but I find that I need to warm up to write in the morning. I get up around four, take the dog out, pour some coffee down my throat, and try to get my brain in working order. (I am not, nor ever will be, a morning person. Having four kids requires me to get up and write early to have that time to myself.) And I can’t launch right into the current work in progress. I don’t want to goof around on Twitter and Facebook, because you lose hours that way. So I usually work on a story I’m writing only for me, something I don’t expect anyone to ever read. I’ve written stories about my World of Warcraft hunter, stories about characters who I just find interesting and I want to see what happens to them. The stories are never structured, and they usually just kind of end abruptly when I’m tired of them — I don’t have to finish, because they’re only for me. 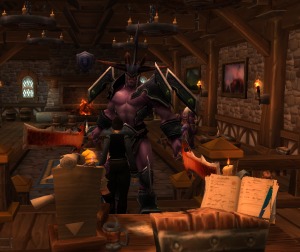 My current writing warm up? Smut fiction about my warlock from World of Warcraft and her wrathguard. I don’t actually write erotica, obviously, but I’m having fun and seeing what happens next. And I find that, once I’ve reached my couple-hundred words of that story, I can launch into Copper Falls easily, my brain already working and ready to create. Giving time to something I’m doing just for fun, I think, extends that sense of fun and “let’s just see what happens” into the work I’m actually planning on publishing. It lets me take risks, try things out, without worrying “oh, I’m going to have to revise the hell out of that later.” I can play, and stretch my boundaries, and then come to the pages of my current work-in-progress in the right mindset.

This is also a great tactic for those struggling with writer’s block. I suffered awful block during the writing of Nether (again, because I let myself become WAY bogged down in worrying about how it would be received) and I started a romance fanfic about a comic book character I like. I remembered what fun it is to play, and the writing of Nether went a lot easier after a while.

So, it’s something to try. And I think it’s something I’ll always have to remind myself, especially when the writing gets hard. I need to remember that instead of taking myself seriously, I need to let go and play.