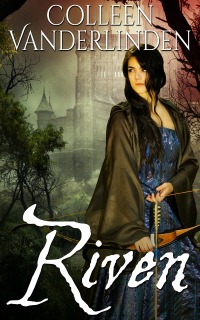 If you’ve been waiting for the next part of the story that started in Exile, today’s your lucky day. 🙂 Riven, Exile #2, is available now on Amazon and in Kindle Unlimited.  The book also contains a reprint of my Exile prequel story, Silent Witness, which kind of shows, in its own little way, where the story in Riven began.

I had so much fun writing this book. Shannen is, at her heart, an “unlikable heroine.” By that, I mean that she’s cocky, abrasive, and cares very, very little (AKA, not at all) about what most people think of her. Yet for all her bravado, she has her insecurities and moments of doubt. Her evolution has been a joy to write. And, I’ll just admit, I got a chuckle out of a few of her lines while I was writing them.

Daarik… Daarik, as I’ve mentioned before, was inspired by an orc from a World of Warcraft fanfic that I’ve been writing on and off for several years now. It’s kind of my “when I’m feeling stuck, write this for a while” project. Anyway, he’s very much a monster boyfriend, Beast, type of guy. He’s not pretty. He’s honorable and brave, but where Shannen is cynical and a bit coarse, for all of his experience, he can be quite naive and uncomfortable with change. So writing him and Shannen together, and seeing them evolve and grow and overcome their faults, was the most fun I’ve had writing in a while.

Thank you to everyone who bought Exile and the many of you who told me how much you loved my weird little dystopian fantasy/science fiction romance story. Riven brings the story to a close, and I hope you love it as much as I do.